Seals are incredibly acrobatic animals. They can swim very fast and turn in narrow areas. It is easy to get captivated by seals with their big, beautiful eyes and lovely round faces.

Some people think of seals as the dogs of the oceans. We agree as seals are very curious by nature, and kind animals.

Seals live and breed in Greenland’s waters. Therefore, you will have a great opportunity to see them lying and relaxing on an ice floe or swimming around.

What seals can you see in Greenland?

The most common seals in Greenland are the ringed seals, the harp seals, and the hooded seals. Bearded seals and the common seal are not as widespread in and around Greenland.

Fortunately, none of them are on the endangered species list. However, the common seal is in decline in West Greenland, which is probably because the species is not arctic and therefore not quite as well adapted.

The sea around Greenland is home to six different types of seals:

The last type, the walrus, is so distinctive that we have given it its own chapter.

The harp seal, also known as the Greenland seal, is the most common species among the seals in Greenland. It is called Aataarsuaq in Greenlandic. From May, it can be spotted in the southern part of Greenland as it moves north from its breeding grounds in Canada.

The seals can often be spotted in large groups in the Greenlandic fjords. You can see them enjoying the Greenlandic summer as they have lots of fish to eat and they enjoy the rays of the sun.

The coat of the harp seal changes color throughout its lifetime. The seal cubs are almost white, the young seals are gray-blue, and the adults are black-brown. This gives you a fun color mix when you see a group of harp seals lying together. In addition to humans, the harp seal’s natural enemies are polar bears and killer whales.

How big is the Greenland seal?

Most often you will see them in a size of about 1.7 meters from tail to muzzle, with the females being slightly smaller. Their weight fluctuates and averages between 90 and 145 kilos. The weight depends on the season, but they are usually very lean after their long migration when they arrive in Greenland at the beginning of the summer months. Then they spend the summer and autumn eating and getting pretty thick before their journey back to the breeding grounds.

The name of the ring seal comes from the round spots that can be seen on the body of the seal, especially on its back. Its Greenlandic name is Natseq, and it is the most widespread seal in Greenland. It is of great importance to the hunting culture among the Inuit.

The ringed seal lives in the fjords close to ice and icebergs, as it loves to lie on the ice and uses caves beneath the snow’s surface to hide its cubs. The ringed seal is one of the Greenlandic species which is best adapted to life in the Arctic. The natural enemies of the ring seal are polar bears, polar foxes, and walruses. However, humans also hunt the ringed seal and use the meat for eating and the fur for clothing.

How big is the ringed seal?

The ringed seal is the smallest of the seal species in the Greenland waters. However, it can still reach a weight of 100 kilos, so it’s not that small. When winter comes, the ringed seal’s blubber can weigh up to 40 % of its total weight.

The spotted seal is the rarest of the species living in Greenland. It always lives near the coast. The spotted seal prefers to live where there is a good current or very little sea ice, as it is not so good at keeping its air holes open when there is a lot of ice or snow.

Spotted seals are social animals, and you will often see them together as they rest on the shores. Their fur is blue-grayish with both light and dark spots, most visible on the back and sides.

The natural enemies of the spotted seal are foxes, killer whales, and man.

How big is the spotted seal?

The spotted seal is between 140 and 170 centimeters; the male is larger than the female. The males can weigh up to 120 kilos, and the female can weigh 90 kilos. Their cubs are approximately 75 centimeters at birth and usually weighs about 10 kilos. 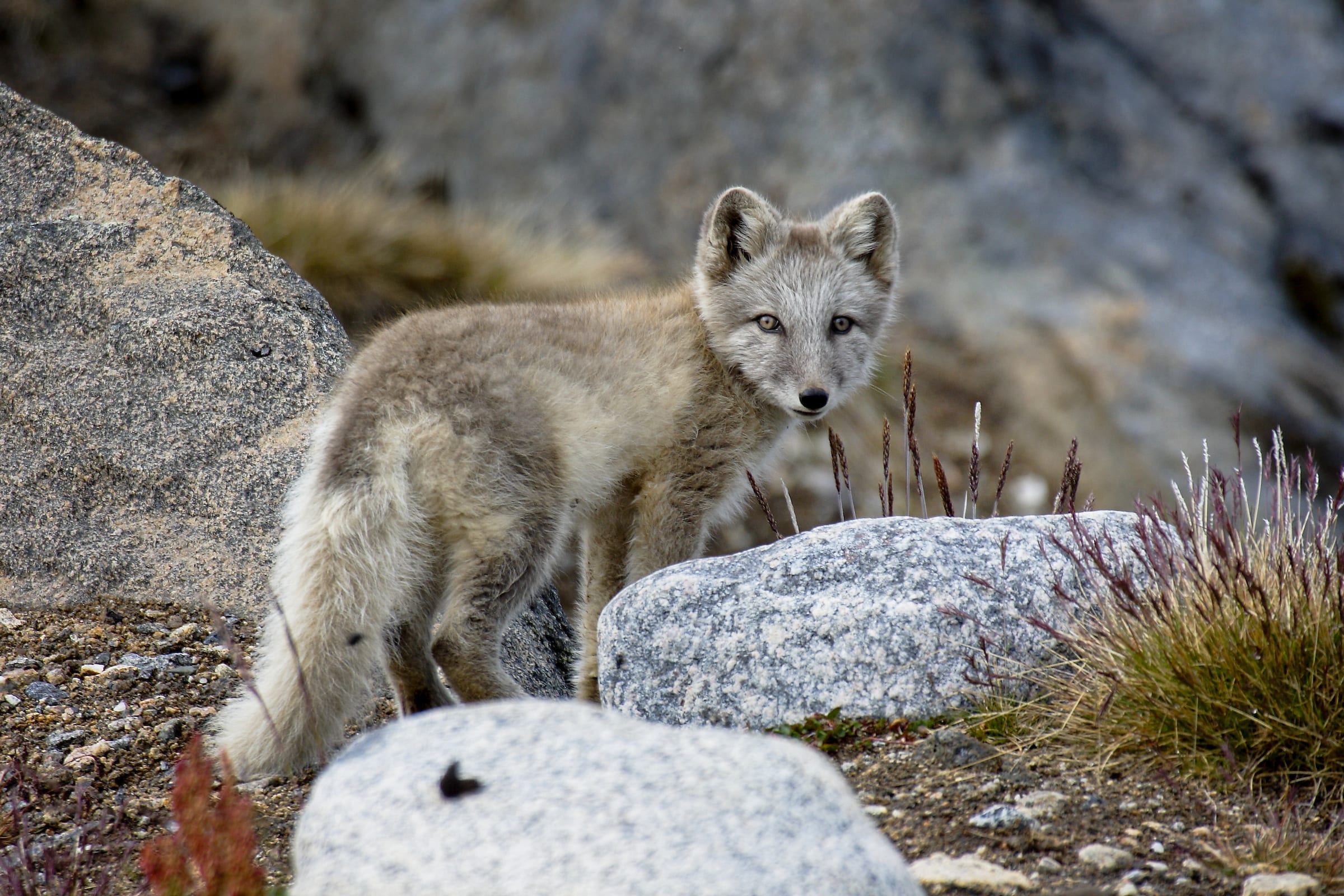 The Arctic foxes have small, handsome faces and large personalities. There is two subspecies, the blue, and the white Arctic fox, which are both widespread in Greenland. 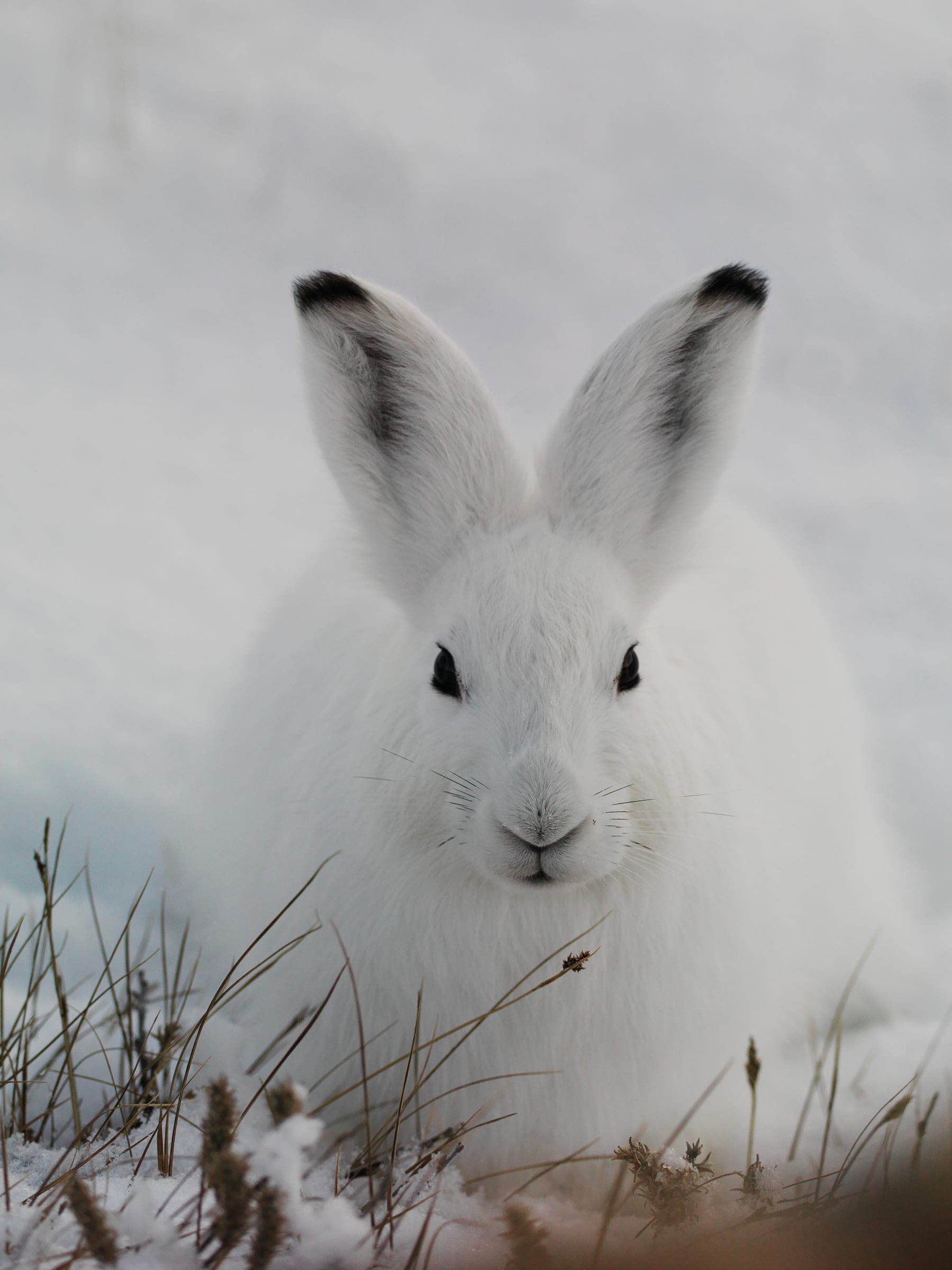 The white bunny with sunglasses and snowshoes. An arctic hare is beautiful with its white, fluffy winterfur to keep it warm in the cold arctic weather. 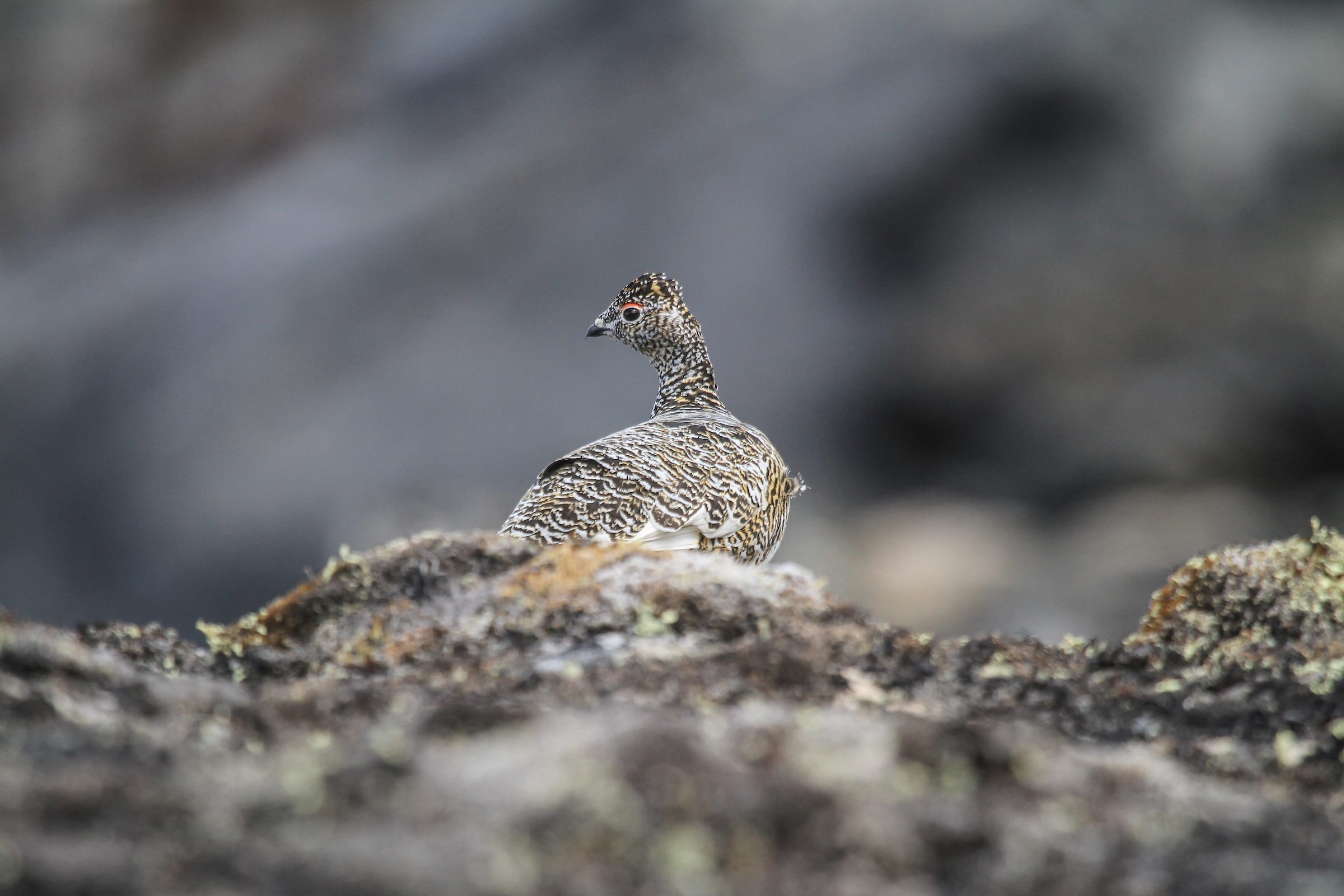 The birds of Greenland

Greenland is home to large majestic birds such as eagles, but also smaller birds like sparrows. A very impressive sight is the large breeding grounds of the birds on the coasts of Greenland.

The hooded seal is widespread in the North Atlantic, and it is extremely numerous in Greenland. The males have a hood-like bladder on their heads. This hood can be filled with air when the seal gets excited and, inflated, it looks like a ball.

Hooded seals are agile swimmers and are incredibly fast in the water. Among seals, it is the species that can dive to the deepest depths. They often eat redfish and halibut, which are only found in very deep water.

Like most of the other seals, the natural enemies of the hooded seals are man, killer whales, and polar bears.

How big is the hooded seal?

The hooded seal is by far the largest of the Greenlandic seal species. It can weigh up to 450 kilos, and males can grow up to 2.6 meters. Most often, the hooded seal will be about 2 meters long and weighing 300 to 400 kilos.

The bearded seal lives in many places in the Arctic, but they are not so numerous. They live in groups, but also prefer large areas for themselves so that they are not too close to the neighbor.

The bearded seal prefers to be near the ice, where it spends most of its time. However, it will go elsewhere if the ice becomes too thick. The bearded seal can have many breathing holes. It uses them alternately so that it always has an open hole somewhere.

You can calculate the age of the bearded seal on the number of layers in its nails. It is a bit like finding the age of a tree. The natural enemies of the seal are polar bears and killer whales. However, it is also hunted to man.

How big are the bearded seals?

The strap seal is quite large at 2 to 3 meters. It can weigh up to 200-360 kilos, and both sexes are about the same size. When the hooded seals give birth, the cubs are more than one meter long and weigh almost 40 kilos. It is quite incredible that they can give birth to such large cubs.

We do hunt seals in Greenland, but there are rules and quotas in place for regulation. The Greenlanders are known to use all parts of the animal and therefore make full use of their prey. Meat and intestines are eaten, the furs are used for clothing or other useful things, such as straps and lining for boots or shoes. The Inuit hunting culture in Greenland is deeply rooted in the country.