Maria Went to Greenland and Released her Inner Child

In February 2020, 25-year-old Maria Rasmussen from Denmark went to Greenland to enjoy the winter wonderland with her boyfriend. This is Maria's story.

Maria had never really planned to travel to Greenland. Instead, it had always been the allure of southern sun that pulled at her when it was holiday time. She was not drawn to Arctic destinations, but Greenland spoke to her because of one thing:

“I am very much into Christmas, and I had seen the TV show “Santa’s Gang in Greenland.” The idea of going to Greenland comes from that show. You connect Greenland with Santa Claus, don’t you? And then it’s also a really unique destination, so I thought we should try going,” Maria laughs when we talk to her on the phone. “I started thinking about going to Greenland five years ago, so the trip was on my mind for quite a while. In 2020, we finally had the time and money to go for it.” 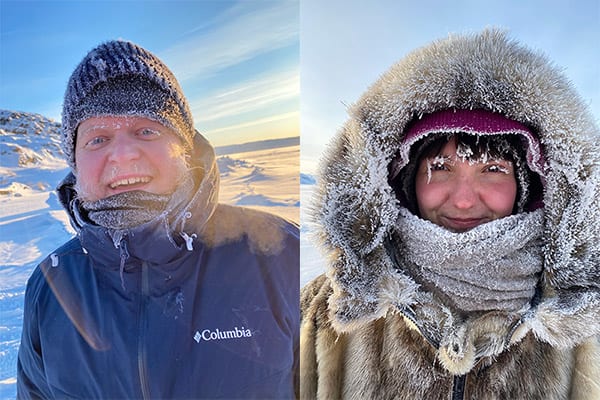 Play and Adventures in the Snow

Maria and Mikkel left for Greenland in February of 2020, just before the world began to shut down due to the coronavirus. Maria had googled various trips, and the choice fell on the Greenland Travel 5-day winter trip to Kangerlussuaq with the excursion package. “We bought a package where everything was planned. It just suited us really well. It was a group trip, so we did not have to think about anything when we left. The tour had a mix of everything we wanted, including northern lights and dog sledding, and those were the things I had imagined I would like to experience up there. It was exciting, and I kept getting surprised even though I had read about everything beforehand,” Maria says.

Most people who go to Kangerlussuaq mention the ice sheet as the big highlight, but Maria does not agree with this. Maria and Mikkel went to Point 660 with the group. On this tour, you go by bus to the Ice Sheet. From the bus stop, you cross the edge of the ice before entering and standing on the ice sheet itself.

“I wear glasses, and I wore glasses out on the ice sheet, and that’s not so good because they freeze. It was cool to be out there, but I was a little wary about taking my glasses off. It’s fun to feel pressure, but I was a little nervous,” Maria says. On the other hand, ice fishing on the fjord was a huge hit. Kangerlussuaq means “The Great Fjord,” and in winter, you can try many experiences on the frozen fjord.

“Now, we sometimes go angling here in Denmark, and the ice fishing was just so wild! We drove some distance down to the harbor, and then we went out on the ice. We had a giant drill with us and drilled holes in the ice. I have no idea what we caught, I’m not that much into it, but we did catch some fish, and I heard it could be used for fish cakes and dog food. It was just so wild to stand outside in the silence and catch fish, and then they had brought cocoa and cookies. It was just so cozy! We were away for two or three hours, and it was something completely different to stand there, pulling at a wire in a small hole.”

Dinner at the Rowing Club

On many trips to Kangerlussuaq, the Rowing Club becomes an important focal point when eating and relaxing. The rowing club is located at the edge of a large lake about six kilometers from Kangerlussuaq. “In the evenings, we ate at the Rowing Club. There was an employee who told stories about mythology, spirits, and northern lights. It was actually stories told to the kids, but it was something we could all learn from. It was just so ‘hyggeligt’,” Maria says, using the world-famous Danish adjective for the word ‘hygge’ – coziness.

The local guide in Kangerlussuaq, Kjeld Mauwa Winther, made a big impression on Maria.

“Kjeld tried to meet everyone’s needs for what they wanted from this trip. He was so sweet and inclusive. And really good with all the kids on the trip, too. On the last day, the children said: “We don’t want to go home, we want to stay with Kjeld!” The rest of us shared that feeling! It would have been a good trip without a guide, no doubt, but it gives something extra to be met by such a good guide. Kjeld spoke at a level so that everyone could understand it. He made sure we did not feel alienated from each other. Kjeld feels passionate about it, and he’s at the very top of the scale,” Maria concludes.

Maria Rasmussen was interviewed by Louise Larsen in March 2020.

A long weekend out of the ordinary!

Winter Exploration at the Ice Sheet